This index links to almost 90 articles. Each describes an wat to make college more affordable. Use them to learn how to do this before, during, or after college

And don’t forget! On August 15, 2018, new articles will be posted here every Wednesday.

Saving and Investing for College

Working While in College

May 1 is probably a big day for your high school senior. Most likely it’s the deadline by which the colleges and universities in which he’s interested require him to accept their one of their admission offers. And many if not most of these institutions also

require other things of him by this date. Among these:

If your high school senior’s already selected the college he wants to attend, and if all the steps described above have been completed, congratulations!

But if you aren’t sure whether or how your student’s selected college is applying a May 1 deadline to him, contact the school right away to find out. And if May 1 is his deadline for anything, be sure all that needs to be done is done. Failing to do so by midnight on May 1 can really foul up college plans!

Contact College Affordability Solutions at (512) 366-5354 or collegeafford@gmail.com for a free consultation if you need assistance on any aspect of financing postsecondary study.

The end of another academic term is approaching, and students struggling with courses are no doubt assessing their options. Should they drop these courses? 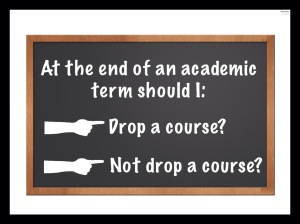 Dropping now is a bad idea for several reasons:

Because of all this, students should avoid the temptation to drop in order to avert grades that are good but, for whatever reasons, aren’t considered good enough. Some students, for example, can’t tolerate anything less than an A for reasons of personal pride. Others may worry that Bs or Cs will ruin their graduate or professional school applications.

Is there ever a time when a student should consider dropping a course? Yes. SAP also requires at least a 2.0 undergraduate Grade Point Average (GPA), and most institutions have minimum GPAs that students must remain at or above in order to remain enrolled. If a student is certain her final grade in a course will put her below these minimums, dropping may be her best option.

Students may appeal lost aid if they fail to maintain SAP. These appeal processes are usually described on aid office websites. Successful appeals generally (a) document extraordinary circumstances (e.g. illness or family emergency) that undermined academic performance and (b) describe steps the student has taken to overcome these circumstances.

Instead of dropping, it’s usually better to seek academic assistance — and to do so ASAP. Visit with the instructor, get a tutor, join a study group, consult an academic advisor or campus counselor, etc. These actions can go a long way toward avoiding all the costly negatives stemming from a dropped course!

Got questions about how to avoid making college attendance more expensive than it needs to be? Contact College Affordability Solutions for a free consultation at (512) 366-5354 or https://collegeafford.com.

It’s bad enough that 75% of college students gamble. But now another perilous student behavior has emerged. A recent survey by The Student Loan Report indicates that 21% of student borrowers invest in cryptocurrencies such as Bitcoin.

As a responsible parent you of course advise your student not to gamble. But also urge him to stay away from cryptocurrency investments!

Unfortunately, these investments are easy to make. After loan and other aid money pays tuition and fees for an academic term, your student gets the remainder to cover that term’s books and other necessary expenses. Now he could have up to a few thousand dollars in hand.

He can invest these funds — hopefully in a safe and secure bank account, but also in high-risk opportunities such as cryptocurrencies. Wherever he invests, he’ll still need to pay for necessities like books, housing, and food as the term progresses.

Some call Bitcoin the potentially biggest “bubble” in history. A $1,080 loss from his

Difficulty paying for basic needs undermines academic performance, and money shortages have long been among the most common reasons why students leave college without degrees, so cryptocurrency financial losses could also end up placing your student among the 25% who drop out every year.

Far better for your student to spend as conservatively as possible and, toward the end of the term, if he has money he doesn’t need, return it to the government. For every $100 of his spring Federal Direct Unsubsidized Loan he returns within 120 days of its disbursement, Washington will immediately cancel all fees and interest applicable to that $100. The result is that for every $100 he returns, the total amount he’ll ultimately repay on this loan will be cut by up to $191!

There’s an old saying, “Never gamble unless you can afford to lose the money.” If your student needs loans and/or other financial aid to help pay for college, he certainly cannot afford to lose money on erratic investments such as cryptocurrencies!

College Affordability Solutions has 40 years of experience in counseling students and parents on ways to manage their dollars for college. Call (512) 366-5354 or email collegeafford@gmail.com for a no-cost consultation.

Maybe your high school senior is planning to be a teacher, or your college student’s already an education major. Her 2018-19 financial aid offer may include a Federal TEACH Grant. If so, she needs to be extremely careful about that grant!

TEACH Grants provide up to $4,000 per academic year. Their eligibility requirements include financial need and:

Teachers must submit forms for each year they plan to fulfill TEACH Grant service requirements in low-income schools, then submit proof they completed those requirements — all to FedLoans, a private company hired to administer TEACH Grants.

If your student fails to timely document four years of required service within eight years of leaving the major for which she got a TEACH Grant, her grant will turn into a Federal Direct Unsubsidized Loan. Interest then gets charged going back to the dates her TEACH Grant was disbursed. For example, if a $4,000 TEACH Grant received eight years ago converted to an unsubsidized loan today, your student could end up repaying $9,360 in principal and interest.

another major (80% of all students change majors), doesn’t teach, or teaches in a school or subject that doesn’t fulfill TEACH Grant service requirements. Small wonder a recent U.S. Department of Education study shows that 63% of TEACH Grants have been converted to unsubsidized loans.

Some teachers also allege their TEACH Grants were falsely turned into loans due to minor paperwork errors or FedLoans losing their documents. 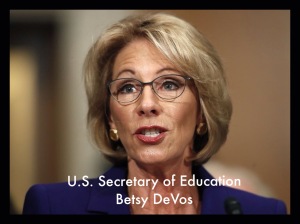 The situation’s so bad that at least one state’s Attorney General is trying to sue FedLoans for “callous disregard” of ex-students’ needs. But the current Secretary of Education is protecting FedLoans by asserting that it’s immune from state consumer protection lawsuits as a federal contractor. Ultimately, the courts will have to resolve this matter.

If your student’s awarded a TEACH Grant, suggest she request other grants instead. If she must take the TEACH Grant, stress the importance of completing its service requirements and carefully documenting everything she does to provide FedLoans with proof that she fulfilled them. Even then, that TEACH Grant may still be a bad deal!

The costs of attendance (“sticker prices”) colleges publish are not always what their students pay. In addition to federal and state awards, many schools offer their own gift aid (grants and scholarships) to discount tuition, fees, and even other expenses.

If an institution promises your prospective student a certain amount of institutional gift aid, analyze its offer carefully. It may be designed to “game” your student by discounting his initial sticker price, but then maximumize the tuition he pays in the future.

Here are some tactics to be on guard against: 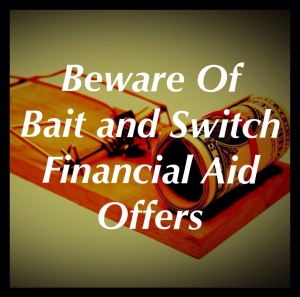 Institutional aid offers may be part of sleazy bait and switch strategies that even some reputable colleges employ. The most obvious of these is loss leader awards — first-year gift aid without renewal commitments for subsequent years. But they can be part of more subtle and sophisticated schemes, too. For more about the latter, see “Before College: Beware of Bait and Switch.” 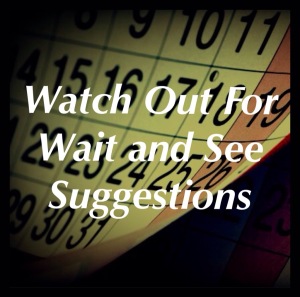 Be careful if an institutional representative suggests your student pay expensive and non-refundable enrollment deposits now, then hold on to find out if more grant or scholarship funding can be freed up for him later. Your student may or may not get additional gift aid — absent a written commitment, there’s no assurance of it — or the added aid may not match his needs or expectations.

Thousands of postsecondary schools reportedly provide the Financial Aid Shopping Sheet with their financial aid offers. This document lays out sticker prices and financial aid awards in a common format, making it easy to do a side-by-side

comparison of the net first-year prices your student will face at various colleges.

The Shopping Sheet also divulges the median amount borrowed by a college’s graduates, plus graduation and student loan default rates for its undergraduates — the last two being relative measures of institutional quality.

Unfortunately, the Shopping Sheet is voluntary. Some schools don’t provide it, making it difficult to measure them against their competitors. Before your student pays an expensive enrollment deposit to such a school, ask why it isn’t revealing it’s comparative data. In short — what is the school trying to hide?

Even colleges making honest and straightforward aid offers can be expensive. So help your student avoid falling prey to the games some schools play with aid offers so his higher education will be as affordable as possible.

College Affordability Solutions has 40 years experience with strategies that help make education beyond high school more affordable. For a no-charge consultation about such strategies, call (512) 366-5354 or email collegeafford@gmail.com.

On Monday the White House released its budget proposal for Fiscal Year 2019, which begins this coming October. The prospective budget is similar to HR 4508, the “Promoting Real Opportunity, Success, and Prosperity through Education Reform”

(PROSPER) Act. This is a bill designed to revamp federal higher education programs. It will soon to be debated in the House.

If your student is now or likely will be a federal financial aid recipient, contact your  U.S. Representatives and Senators to let them know your thoughts on the proposed budget and HB 4508. Why? If Congress passes either as written, several federal student aid programs would be reduced or eliminated.

Subsidized Federal Direct Loans: Currently, no interest is charged on these loans until six months after their undergraduate borrowers leave college. But they would end for those first borrowing on or after July 1, 2019. Even at current interest rates, which are expected to rise, this would increase the cost of borrowing the $27,000 maximum allowed over 4 academic years by at least $2,800.

Income-Driven Repayment: Four repayment options would be replaced by one repayment plan requiring ex-students to pay 12.5%, instead of the current 10%, of their discretionary income toward their federal college debts. The repayment period would last 15 years instead of 20 to 30 years for undergraduates, and 30 years for graduate students. Discretionary income is the amount a borrower’s income exceeds 150% of poverty-level. 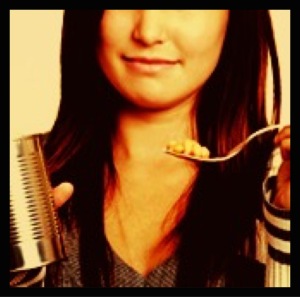 Federal Pell Grants: College costs keep rising, but the budget proposes to limit Pell Grants to the same amount as in FY 2019 as this year.

Contact College Affordability Solutions at (512) 366-5354 or collegeafford@gmail.com for a no-cost consultation you have questions about how to pay for college.